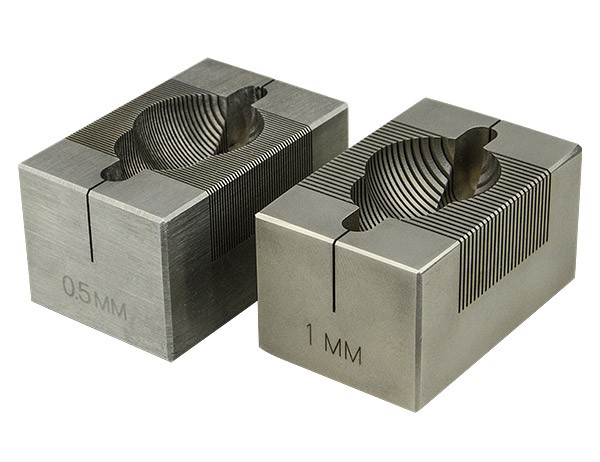 These high grade acrylic and stainless steel matrices are precisely machined to ensure reproducible even sections of tissue from rat or mouse. The brain matrices allow the researcher to slice either coronal (perpendicular to center line) or sagittal (parallel to centerline) sections through the brain.

All coronal brain matrices have an additional mid-line sagittal cut to aid in the separation of the left and right hemispheres. The mouse brain matrices can also be used on neonatal rat brains.

When making a cut it is easiest to insert the blade at an angle, not straight down. Insert the blade in one side of the matrix at about a 45 degree angle then cut with it. Make the first cut with a blade and leave it in the Brain Matrix. Then take a second blade and make an adjacent cut. Leave this second blade in the Matrix as well. Now you can remove the first blade and cut with it again. Continuing in this “leap frog” method allows for more control over your cuts and limits brain movement while slicing.

When using this method, the previously cut slice will stick to the “leaping” blade as you pull it out to make your next cut. This should be removed before making the next cut. You may also choose to use more than two blades leaving multiple blades in. Some may find it beneficial to place a blade at either end of the desired section, and then make their cuts between the two end blades. Making a cut halfway between the blades, then cutting each half in half, etc. is a very stable way of doing it. Then to remove a slice, pull out the two blades on either side of it. After one slice is removed you only need to pull up one blade at a time to get

We use cookies on this site to enhance your user experience

By clicking any link on this page you are giving your consent for us to set cookies.

As is common practice with almost all professional websites this site uses cookies, which are tiny files that are downloaded to your computer, to improve your experience. This page describes what information they gather, how we use it and why we sometimes need to store these cookies. We will also share how you can prevent these cookies from being stored however this may downgrade or 'break' certain elements of the sites functionality.

We use cookies for a variety of reasons detailed below. Unfortunately in most cases there are no industry standard options for disabling cookies without completely disabling the functionality and features they add to this site. It is recommended that you leave on all cookies if you are not sure whether you need them or not in case they are used to provide a service that you use.

You can prevent the setting of cookies by adjusting the settings on your browser (see your browser Help for how to do this). Be aware that disabling cookies will affect the functionality of this and many other websites that you visit. Disabling cookies will usually result in also disabling certain functionality and features of the this site. Therefore it is recommended that you do not disable cookies.

If you create an account with us then we will use cookies for the management of the signup process and general administration. These cookies will usually be deleted when you log out however in some cases they may remain afterwards to remember your site preferences when logged out.

This site offers newsletter or email subscription services and cookies may be used to remember if you are already registered and whether to show certain notifications which might only be valid to subscribed/unsubscribed users.

This site offers e-commerce or payment facilities and some cookies are essential to ensure that your order is remembered between pages so that we can process it properly.

In some special cases we also use cookies provided by trusted third parties. The following section details which third party cookies you might encounter through this site.

This site uses Google Analytics which is one of the most widespread and trusted analytics solution on the web for helping us to understand how you use the site and ways that we can improve your experience. These cookies may track things such as how long you spend on the site and the pages that you visit so we can continue to produce engaging content.

From time to time we test new features and make subtle changes to the way that the site is delivered. When we are still testing new features these cookies may be used to ensure that you receive a consistent experience whilst on the site whilst ensuring we understand which optimisations our users appreciate the most.

Hopefully that has clarified things for you and as was previously mentioned if there is something that you aren't sure whether you need or not it's usually safer to leave cookies enabled in case it does interact with one of the features you use on our site.